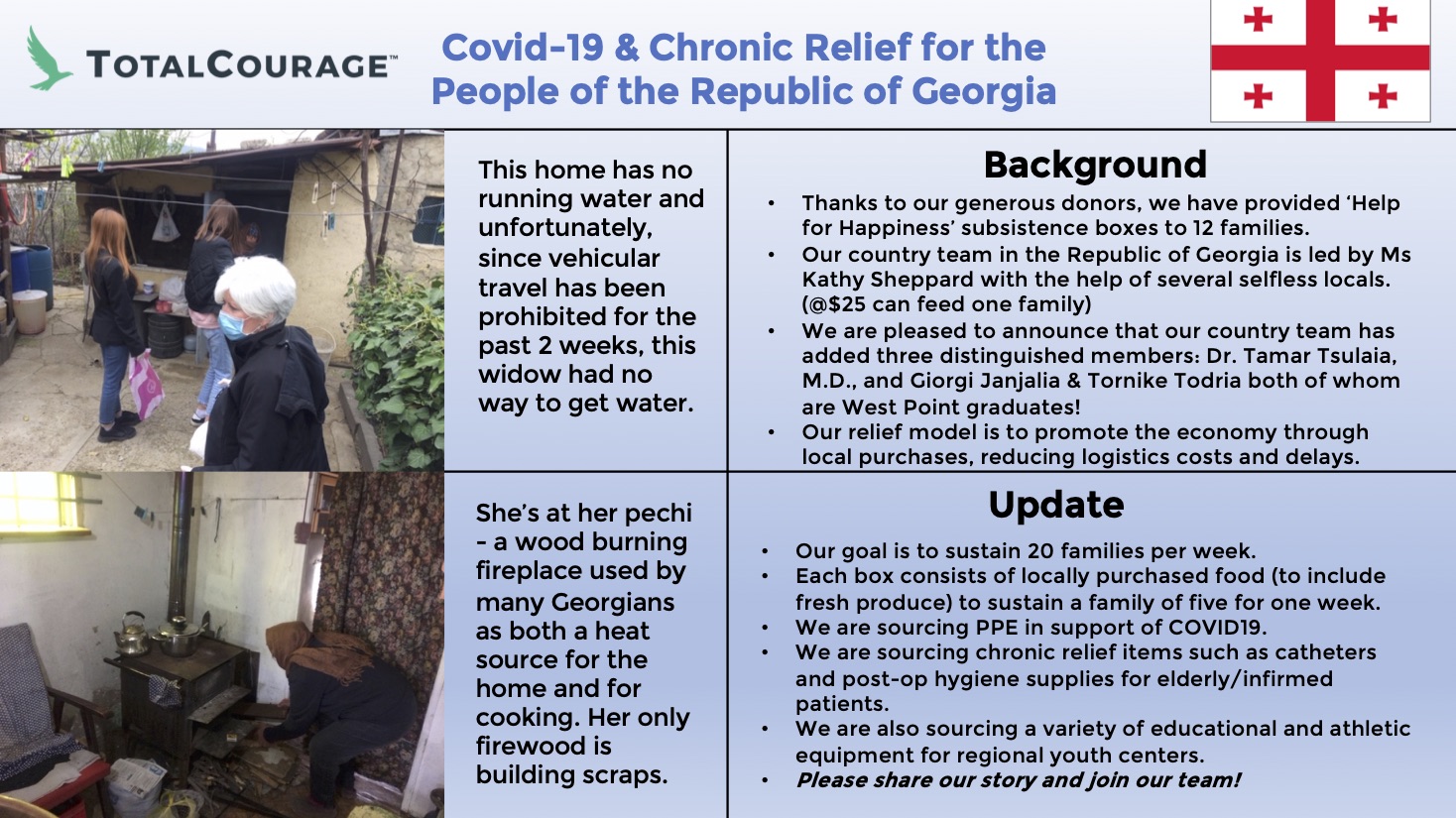 Total Courage, Inc., a 501(c)(3) nonprofit headquartered in Knoxville, Tennessee announced today that they have partnered with MAP International and Project Hope to provide out-patient and over-the-counter medicines to the indigent in the developing world.

This effort, led by Dee Daugherty and Todd Scattini, has accelerated due to the great need during this time of crisis.

Humanitarian relief projects to provide medicines and PPE include the Republic of Georgia, Bosnia-Herzegovina, Macedonia, Kosovo and Romania.

Please support Total Courage by making a generous donation on our home page. 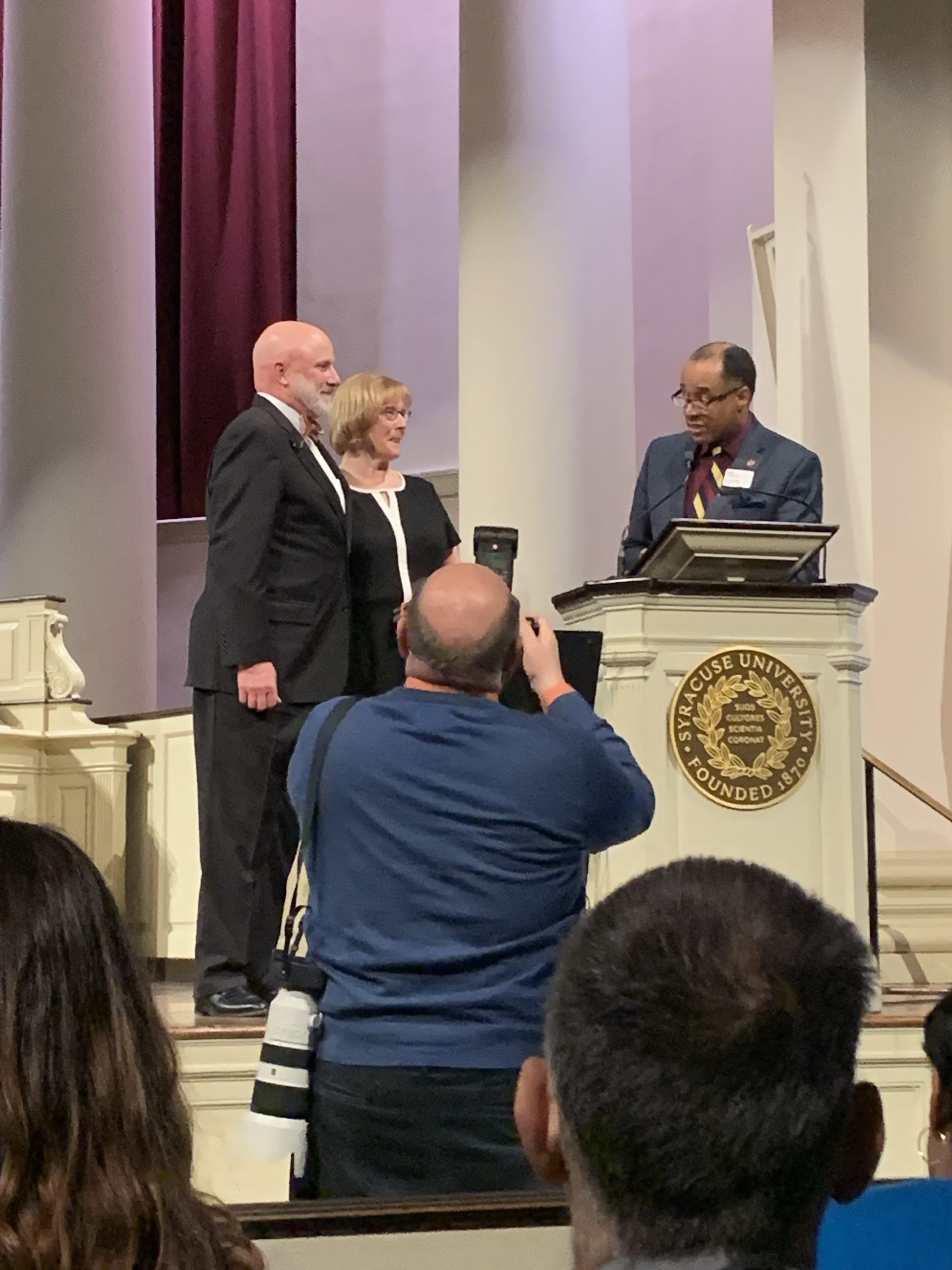 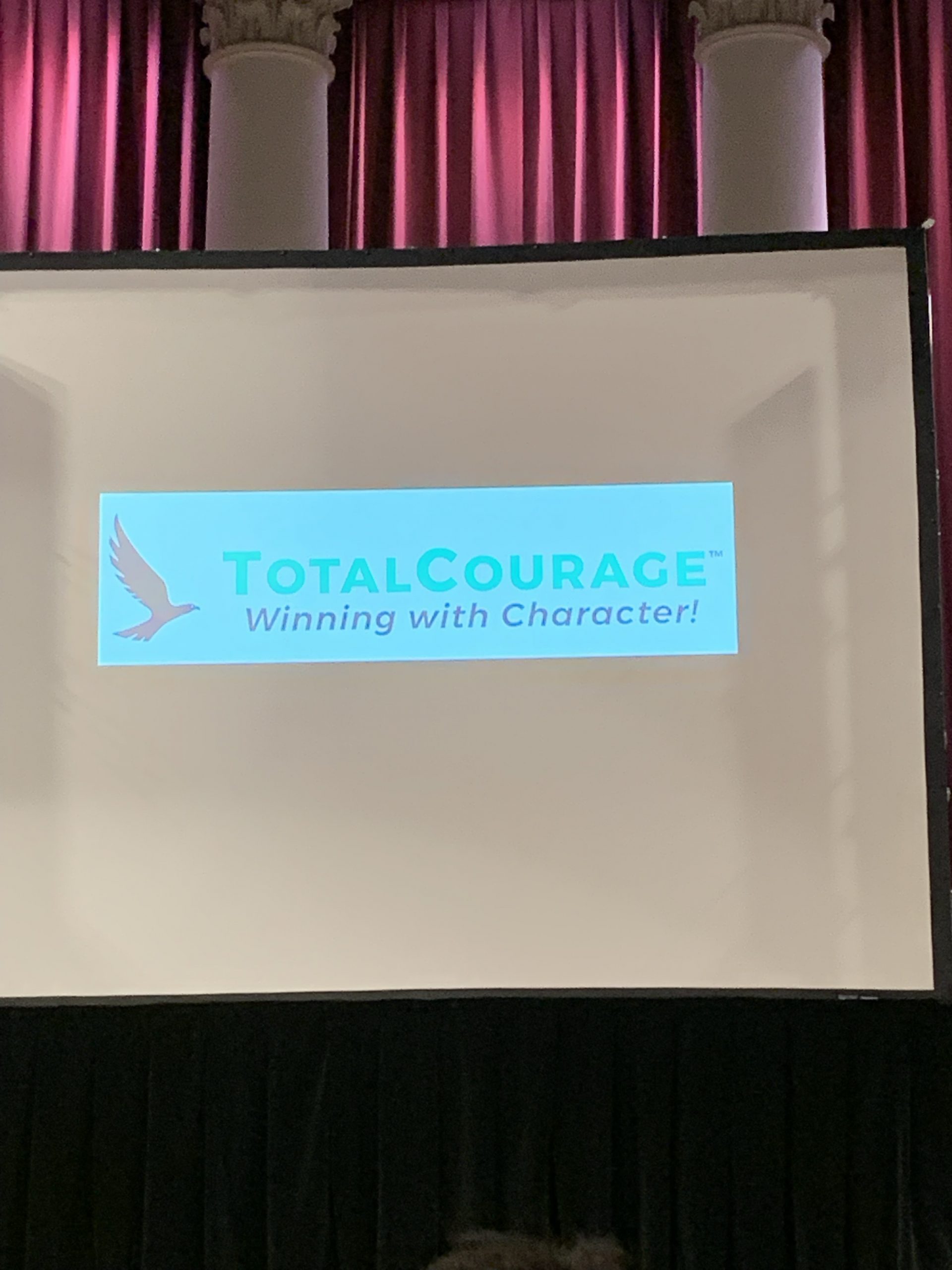 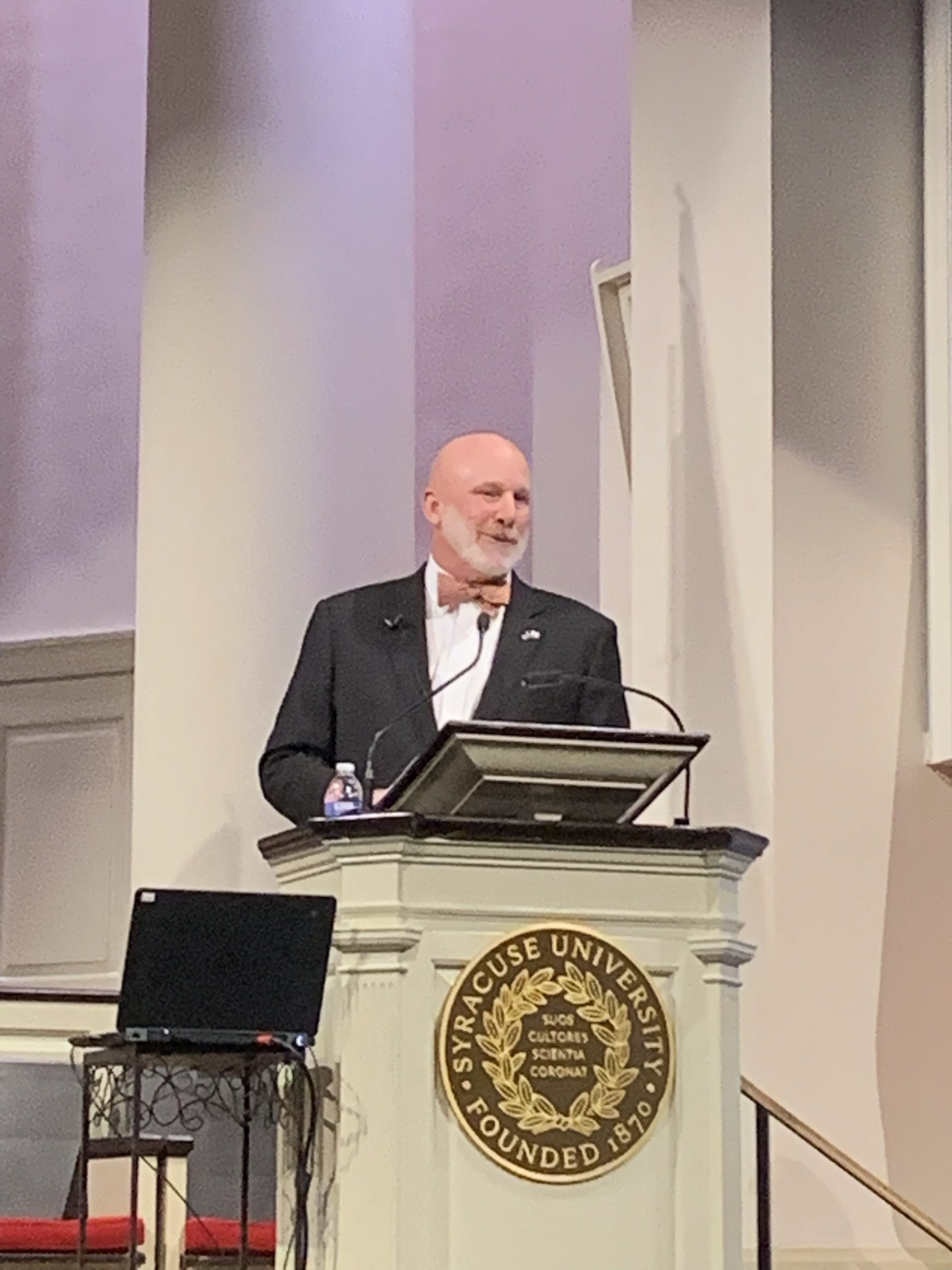 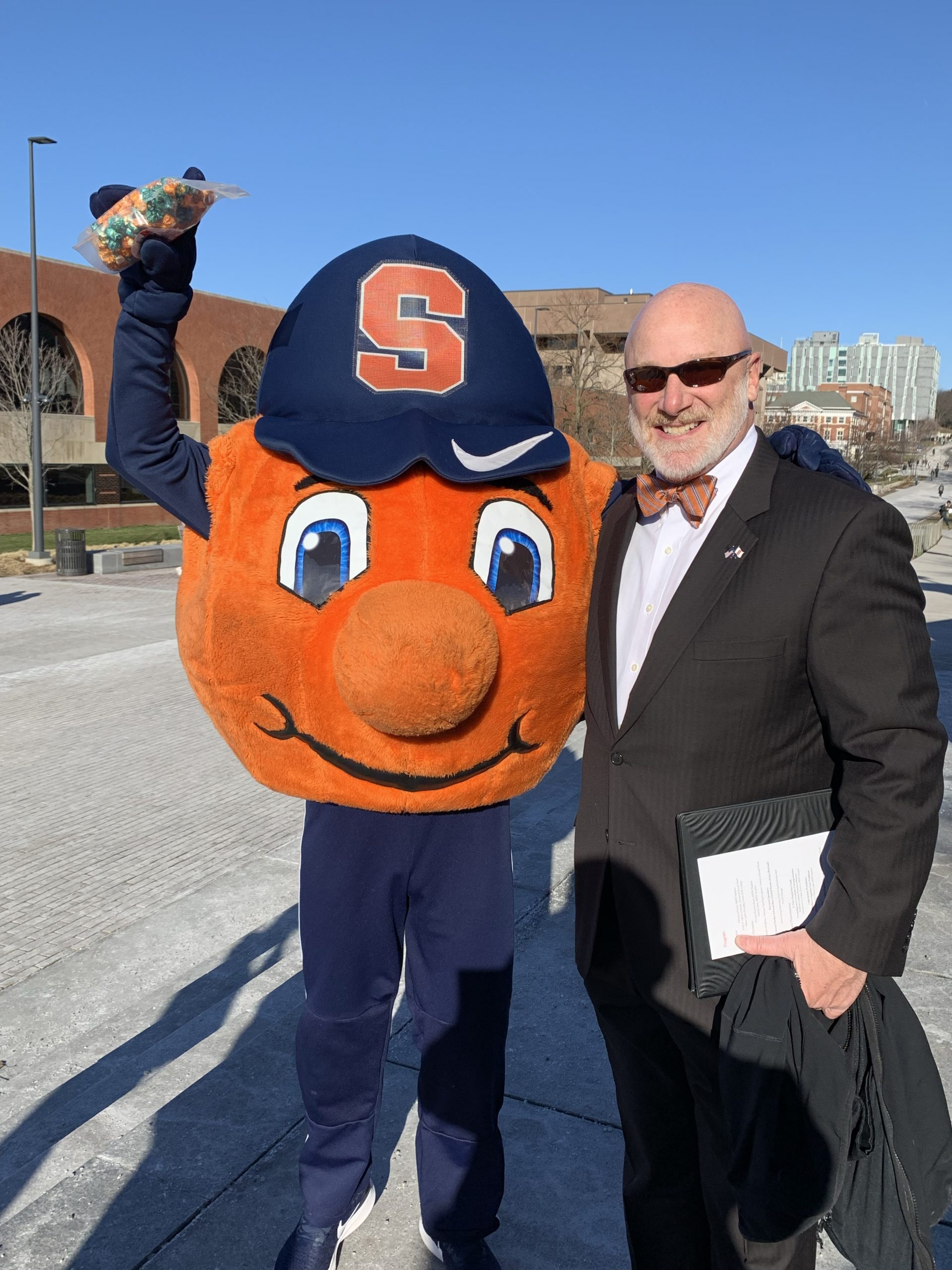 During the Canadian Football League playoffs TotalCourage was invited to spend an entire weekend with the Hamilton Tiger-Cats professional football team.

Our Executive Director, Colonel (Retired) Dee Daugherty, speaks to the athletes about the value of resilience and endurance. Dee hammered home the importance of mental toughness, communication and selflessness in the face of adversity.

The Hamilton Tiger-Cats are a world class organization and their head coach, June Jones, believes that winning starts with individual character. Dee emphasized that in order to be champions everyone must be prepared to assume a leadership role.

The TotalCourage team kicked off 2019 with a compelling message of resilience, endurance, and selflessness. It was a tremendous visit with the talented men and women of the University of Arizona Track and Field Team.

Parker delivered an inspirational message about the value of making a promise to oneself and to others and the importance of upholding those promises.

The TotalCourage team was hosted by the outstanding Director of Cross Country and Track & Field, Fred Harvey. Coach Harvey’s emphasis on Winning with Character has created a legacy of excellence! Olympian Greg Foster shared his powerful story of personal endurance.

The TotalCourage team enjoyed CBWA, “caring by walking around!” In the photos above we see Dee observing the Wildcats men and womens throws team.

The TotalCourage character coaches are honored to be a small part of the Wildcat leadership and character program.

Dee Daugherty, Parker Schenecker and Greg Foster enjoyed a great visit to the oldest city in Texas, Nacogdoches! As guests of the legendary Stephen F. Austin University Head Track & Field Coach, Phil Olson, the TC team enjoyed a down home catfish dinner with the Coaches followed by a day observing practice and meeting all of the athletes. 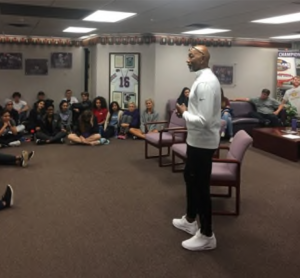 personal story of resilience, remembrance and the value of upholding promises and commitments.

Later Dee introduced World Champ and Olympian Greg Foster who captivated everyone with his amazing story of mental, emotional, spiritual and physical endurance both on and off the track over a career that spanned two decades competing at the highest level in the world of track and field!

Dee wrapped up the evening by reminding everyone that 10% of your life is comprised of things that happen to you, but 90% of your life is devoted to how you respond to that 10%. He tied in the personal examples of Parker and Greg with a clear approach…Lead a Life of Character!

TotalCourage is proud to welcome Character Coach Greg Foster to our team. Greg was a four-time NCAA national champion (110 meter hurdles and 200 meter dash) as well as an Olympic Silver Medalist and five-time World Champion in the hurdles.

Greg joined Founder and Executive Director Dee Daugherty and Character Coach Parker Schenecker for a 3- day visit with coaches and over 110 Track and Field athletes at the University of Southern California and California State-Los Angeles.

Team TC was able to help student-athletes and coaches focus on Winning With Character. Parker and Greg shared their incredible stories of resilience, gratitude, and endurance.

“I am honored that you chose the Golden Eagle Family. I am very thankful!!”

“We are so grateful for TotalCourage. Your message is real and our athletes respect your sacrifices. You all care by walking around!”

2nd Quarter of 2018 has been such a rewarding time for all of us at Total Courage. We truly enjoyed continuing the Total Courage Speaker Series at Georgia Military College followed by a special visit to Gator Country!

Dee, Greg Foster, Parker Schenecker and Mike Foley had an amazing visit with the student-athletes and coaches at Georgia Military College.

Greg and Mike enjoyed a VIP tour of the campus followed by an office call with US Army Lieutenant General William Caldwell.

The Total Courage character coaches attended a GMC Spring Football Scrimmage. After practice Dee was asked to speak to the entire team about the value of humility.

The next day, World Champion and Olympic Medalist Greg Foster spoke to over 200 GMC men and women student-athletes about his personal walk of resilience and endurance.

After a standing ovation, dozens of student-athletes remained to engage in personal character based conversations with theTotal Courage team.

Thank you to Athletic Director and Head Football Coach Bert Williams for being such a great host!

While in Gainesville, Dee and Greg had the privilege to work with the legendary Head Track & Field Coach ‘Mouse’ Holloway of the Florida Gators. Currently, the Gators are ranked number one in the nation in track & field and enjoyed earning the indoor national championship earlier this season. The Gators are on board for the 2018/2019 Academic Year with Total Courage and we look forward to a dynamic program developing Leaders with Character! Go Gators!

Check out the work that Character Coach Parker Schenecker did at Georgia Military College this week! Read the press release from GMC below.

Each year the student athletes at GMC are taken through a week by week TotalCourage Character Development program by their coaches in each sport.  Three times a year there will be a guest speaker that will come in and enhance what is being taught in the program through their life experiences.  The GMC Athletic Department had the pleasure of hosting retired COL Parker Schenecker as their speaker today.

Before joining TotalCourage as a Character Coach, Parker Schenecker served as Vice President of Programs for because I said I would – a nonprofit social movement dedicated to the betterment of humanity through character development and education.  As a Senior Leader and Strategist in the United States Intelligence Community, Colonel Schenecker was directly responsible for support to the US defense and counter-terrorism efforts in the Middle East.  He finished his 27-year Army career at United States Central Command in Tampa, Florida with multiple combat tours in Iraq and Afghanistan and various other deployments to the Middle East.

He has had the great fortune to work with and lead the best people America has to offer; individuals who made a solemn promise to support and defend the Constitution of the United States and volunteer to put their lives on hold and put themselves at risk in defense of freedom and our way of life.

He has numerous US and foreign defense service awards and recognitions, including the Defense Superior Service Medal, the third highest recognition from the Department of Defense and the German Service Cross in Silver. After retiring from the Army in 2011, he became a Department of Defense Civilian employee and continued to take pride in his service to country both in the US and on various deployments in the Middle East.

However, his greatest joy has always been his children and their friends.  Calyx and Beau Schenecker were his greatest achievements; young adults who epitomized love, courage, honor, and citizenship. Calyx – the artist and runner.  Beau – the soccer player and Future Business Leaders of America leader.  Both – bright futures ahead.  Wise beyond their years, Colonel Schenecker spent his personal time immersed in his children’s and their friends’ lives and various activities.

Colonel Schenecker’s focus after retiring from the Defense Department has been on youth development in the Tampa Bay area through a Leadership & Ethics Speaker Series focused on Middle School students and through scholarship for leaders, artists, and athletes.

After 30+ years in government service and service to his community, this great leader, role model, and Dad has chosen to continue his commitment to his children and his service to society by joining the ranks of Total Courage.

The GMC Athletic Department presented one male and one female athlete the Total Courage Character Award.  Ricky Ortiz a Men’s Soccer player and Sonita Mutang a Women’s Soccer player  both were recipients of this award.  Congratulations to both of them as they continue to exhibit the values and principles of living a life of character.